Showing posts from October, 2018
Show all

October 31, 2018
PRINCE Harry has come to the rescue of a lost little toddler during the last day of his royal tour with Meghan Markle.
The couple were on a public walkabout at Government Gardens in Rotorua in New Zealand on Wednesday when the Duke of Sussex, 34, spotted a young boy who had managed to squeeze through the metal barriers, away from his parents.In footage shared on Twitter, Harry can be seen gently guiding the toddler by the shoulders, asking those nearby: “Guys, whose child is this?”After a couple of moments, he spotted the grateful parents and delivered them back their son.
It comes just two weeks after the royal couple announced that they are expecting their own baby in the first half of 2019.
During a public meet-and-greet earlier this week, Harry comforted a six-year-old boy who had also lost a parent.
Otia Nante’s grandmother told Harry: “He really looks up to you because he actually lost his mummy too.”
“Life will always be alright. You know that? I’ve made it to 34 years old, and life…
Post a Comment
Read more

The Princess has travelled to Asia for a very special reason

October 31, 2018 - 10:51 GMTChloe BestPrincess Beatrice is in Laos following her sister Princess Eugenie"s royal wedding. Find out whyPrincess Beatrice spent a week in South East Asia following the royal wedding for a very special cause – to run a half marathon supporting a children"s hospital. The 30-year-old, who served as maid of honour at her sister Princess Eugenie"s big day, travelled to Laos a week later where she joined a group of friends to run the Luang Prabang Half Marathon.A keen runner, Beatrice previously became the first royal to run the London Marathon in 2010, and completed this race to benefit Lao Friends Hospital for Children. The Princess carried out a number of engagements on behalf of charity Friends without a Border during her week-long trip to Laos, including opening the hospital"s expanded Neonatal Unit, where she met many of the staff and patients there. 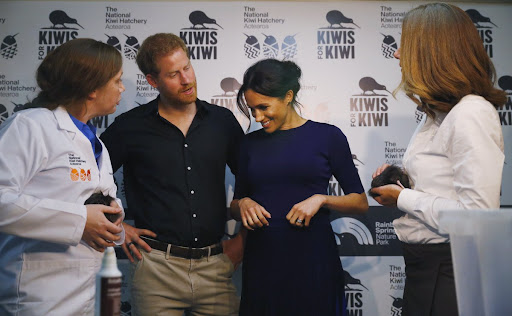 Meghan and Harry travelled to Rainbow Springs inn Rotorua today to learn about how the centre’s kiwi breeding programme works. The kiwi, New Zealand’s national bird, has become increasingly endangered in recent years and the Duke and Duchess met with those working to protect it.

Following their visit to Rainbow Springs, the couple completed a walkabout, meeting with various members of the public.


Love Meghan’s look today? We asked the team to come up with some of their favourite #MirrorMeg options:

If you are looking for more details on the day’s engagements, please visit our Royal Tour page. We’ll update that page with everything Meghan wears on the Tour, additional details and resources about the engagements she and Harry u…
Post a Comment
Read more For their final engagement in Fiji, the Duke and Duchess of Sussex visited the city of Nadi in Western Fiji, where they attended a special event at Nadi Airport.
The couple arrived in a seaplane following a romantic overnight stay at the heavenly Vatuvara private Island resort.

With just three villas on the resort, guests are guaranteed a peaceful and secluded stay in the rarely explored Northern Lau group of Fiji. It is the epitome of an exclusive tropical destination, hidden as far off the beaten path as one can imagine. Guests can enjoy a relaxing picnic on the beach and yoga. I imagine the couple indulged in both.

More from Resort: "Rising out of the cobalt blue waters of the South Pacific, this breathtaking destination is located in Fiji’s pristine northern Lau waters on Kaibu Island and offers a secluded, unspoiled paradise for the discerning traveler. Remote and only accessible by the resort’s private airplane, Vatuvara Private Islands can accommodate couples and intimate gro…
Post a Comment
Read more

The Royal couple are in Rotorua, New Zealand and have a packed day ahead.
Prince Harry and Meghan Markle will visit the Ohinemutu for traditional Maori Powhiri and lunch.
Then they will visit a Kiwi breeding programme and name two chicks.
Finally, there will be a walkabout in the town followed a tree walk and mountain biking showcase.
Follow below for live updates on everything that happens on the last day. All times are in GMT.


7am update: Touching moment Meghan rewards two-year-old with big hug
A two-year-old who crept through the railing during Meghan and Harry"s final tour walkabout was rewarded with a big hug from the Duchess.
Catalina Rivera and her mother Mercedes - who moved to New Zealand from El Salvador 10 months ago - were among the well-wishers at Rotorua"s Government Gardens.
Meghan initally had difficulty communicating with the youngster as Catalina"s first launguage is Spanish.
Mercedes, who is eight months pregnant, said: "Meghan said th…
Post a Comment
Read more
More posts